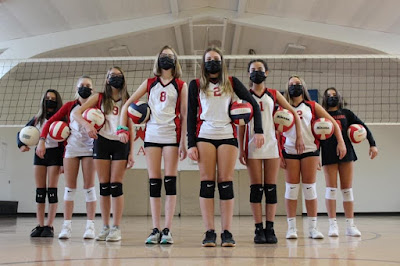 The “Sweaty Eagles” they jokingly called themselves after a hot August practice in 5th grade. This stuck with them for the next 4 years.

This is how we ended every practice, every game and sometimes used it as a cheer during matches. (The opposing team thought we were nuts:). That name was the start of a great 4 years. 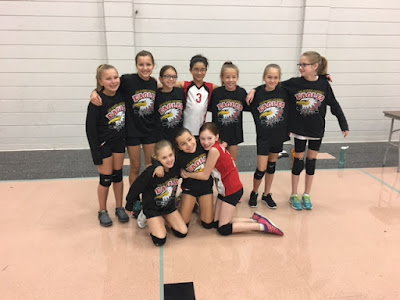 Fifth grade was a bit of learning curve for the girls and ourselves as new coaches. If you have ever watched a group of 5th graders play volleyball you know that just getting it over the net is a big deal. These girls came in with one goal that year, to have each of their teammates get at least one serve over the net. They came pretty darn close.

During 6th and 7th grade the girls started to show their individual talents. Some were good at passing, some had the finesse to set, while others were able to play aggressively at the net and they were all becoming amazing servers. By the end of 7th grade we were really playing volleyball!  The girls knew their positions, they were communicating and we were playing as a team. Eighth grade was going to be amazing!! 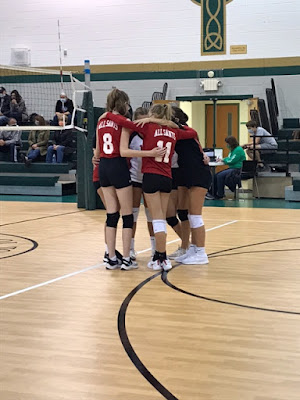 And then.....we had a world pandemic.  It wasn’t clear if it was even safe to go to school let alone play volleyball. But we got the ok to start practicing outside in the hot August sun on the baseball field with all the dirt and sticks and no net. Did they complain???  You betcha. But it was all worth it the day we heard we could move into the gym it. Masks and all, these girls just wanted to play ball!

Their season was good with the best percentage of wins we’ve had but that is not what we are most proud of. Over the years these girls have grown in spirit, love and friendship and are becoming wonderful young ladies in Christ. Helping Laura to coach the girls in volleyball over the last four years has been so much fun, and so very rewarding. I didn't start out planning to be Laura's assistant in coaching ASA volleyball. I had never played volleyball growing up, and had played very little as an adult. I went up to watch and help with a practice, and I just never stopped going! Laura and the girls invited me in to learn alongside of them.

The opportunity to be around this special group of then 5th graders, and now 8th graders, was one I did not want to pass up. Having the chance to watch them learn, grow and be successful in this sport of volleyball has been so fun. They were so little looking back at pictures from 5th grade, and the pictures now show how much they have grown. They are so beautiful and strong, each one of them!

During our very last match a couple of weeks ago, as they were about to take the court for their last game, I held back tears knowing that this was going to be the last time they were going to be together as a team, and the last time I would get to be around them all. The "Sweating Eagles" went out there, and made everyone very proud, during their last game, and in each game over the last four years! They worked hard at practices, they were kind and encouraging to their teammates, and they always represented ASA very well with respect towards other teams and schools they played and visited over the years. Thank you girls for letting me be part of the last four years! I had so much fun with you all!

I loved being on the volleyball team! I got to spend time with friends and we had lots of fun parties. I learned to love volleyball! - Maya Schaab

We could help each other improve and see each other grow every year. Even when somebody made a mistake we helped them up and told them they did good. It made me feel like we were all a family and we could have fun together.