Dear All Saints Parents and Community,

My name is Nicole Patterson and I’m thrilled to be teaching 6th grade English Language Arts and Religion at All Saints Academy for the 2018/2019 school year. I’m passionate about Catholic School education and feel blessed to work with this outstanding school and community.

I grew up in Grand Rapids and my own Catholic School experience started many years ago as a student at St. Alphonsus School.  After graduating from Catholic Central, I went on to get my teaching degree in regular and deaf education from Michigan State University.  My first teaching position was at St. Thomas the Apostle School, where I taught middle school language arts. I left St. Thomas in 2003 to stay at home with my 4 children and to work on my master’s degree from Aquinas College. I returned to teaching in 2009. After working briefly as a hearing and language impairment teacher with GRPS, I took a position with Divine Providence Academy in Conklin, Michigan and have been teaching language arts to fourth through eighth graders since 2011.

While working as a Grand Rapids Diocese teacher, I had a chance to get to know the leadership and staff at All Saints Academy.  I was impressed with their commitment to excellence and ongoing growth.  When a position became available, I felt God’s call to serve this vibrant community.  I’m eager to share my Catholic faith and years of experience with ASA.

I will not only be a new teacher, but also a new parent at ASA.  My own son, Nikolas (who goes by Niko), will be a new 6th grade student.  He is the youngest of my four kids and the only one not attending West Catholic in the fall. As a parent, I’m impressed with what ASA has to offer.  I believe this will be a good fit for both of us.

I’m excited to start setting up my classroom and getting to know even more about the All Saints Community.  I can’t wait to get to know my new students! Please feel welcome to reach out and contact me with any questions or to stop by to meet me before school starts, as I’m sure I’ll be around quite a bit.  I’m looking forward to a great year.


Creativity and Innovation Through Teamwork and STEM

July 9th through 12th a group of creative and innovative designers from 1st through 8th grade gathered at the middle school with Mr. Fillman for STEM camp. Their first challenge was to work as a team to lift, and then hold in place, an object placed in a small ring with string. The round ball pictured above was a challenge, but they were successful with a small stuffed animal.

The next challenge of the week was to design and construct a display stand for a "statue." There were a variety of different ideas! Many stood alone and held a test plastic frog, but didn't support the weight of the final test statue.

As the quote from Thomas Edison in the front of the middle school science lab says "I have not failed. I've just found 1,000 ways that won't work." STEM campers reflected on and experienced what it means to learn from "failures." They observed and talked about where their prototypes were weak and how they could improve on their initial designs.

On Tuesday Mr. Fillman started camp by reading Beneath the Sun, a book about how animals seek shelter from the sun's heat on hot summer days. He then took campers outside and introduced them to solar beads, a craft supply that changes color when exposed to the sun.

The first design challenges inspired by this story and item was to design an animal with solar bead eyes. Then groups constructed a shelter for their animal to rest in, protected from the sun.

Inspired by another book and a Gingerbread Man needing a lift across a river campers assembled and testing a raft for a gummy bear. Mr. Fillman provided "hurricane" winds in te form of a fan to propel each prototype through the science lab sink.

Campers worked with our friends from Urban Roots and our Master Gardener friend, Mrs. Carol Tuesday and Thursday morning! They learned about the part plants that we eat: roots, leaves and fruits. They tasted peas, carrots, and blackberries. Campers found a number of baby frogs living in our garden. They learned about various types of ground cover, like straw and pulled weeds, used to help keep plants wet and cool in the summer. They also helped to weed and plant peppers and Swiss chard.

The final project of STEM Camp week was designing and testing a prosthetic leg for an elephant. Campers watched a short video clip about a team who designed a prosthetic leg for a dog. They learned about the many different styles and ideas the team when through until they found the perfect replacement leg. Then they read about an elephant in need of something to help her walk and set out to prototype an idea that they could test on their own limbs. Students came up with a number of great ideas and learned some valuable insights about the importance of comfort and sturdiness when building a device to help someone walk.

Throughout the week campers engaged in discussion with Mr. Fillman about the technology and real world connections to all of their STEM challenges!

Practiced our Faith by


Celebrated together as a Loving community


Worked to Serve our Community 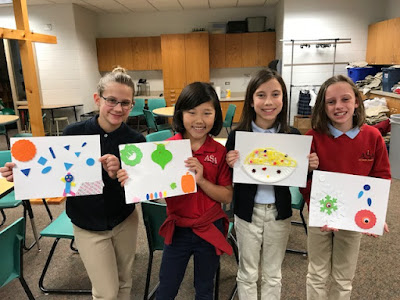 Relationship Building and Life Skills for All

It is exciting to watch all of the students continue to grow in their social emotional and academic development, ability to problem solve and grow their personal toolbox of coping strategies to be resilient and confident.

The school counseling program at All Saints Academy is for all students and is delivered through individual, small group and classroom lessons.

Lunch Bunch provides an opportunity to connect with students and continue to build and strengthen peer relationships. It allows small groups of students to eat together, interact and complete an activity. During this time, good manners, social skills, listening skills, and fun are practiced. The students are excited about this opportunity and it is one of the many highlights of my day!

Small group counseling is an opportunity for all students that may be requested by teachers, parents  and or interested students. Groups last about 6 weeks and allow for students to work and receive support in a certain area of interest or need. Parent permission is required prior to the group starting. Permission slips state the purpose and goals expected to achieve during the specific group. Some of the small groups during the 2017-2018 school year included: Friendship Groups, Bounce Back, GIRLS (Girls in Real Life Situations) Group, Breaking the Boy Code (Boys Group)

Classroom lessons are for all students and are designed to be preventive and proactive. Our Second Step Program is an evidence-based social-emotional learning curriculum that we currently use with our elementary students through classroom delivery. Second Step states, “When students are better equipped to manage their own emotions and build positive relationships, they’re better equipped to learn.”

Some of the topics of classroom lessons include but are not limited to: Growth mindset, problem solving, skills for learning, bucket filling, coping skills, empathy, listening skills, fair ways to play, emotion management, being assertive, positive self talk, career awareness.

Students at All Saints Academy learn the bucket filling language early on! It is based upon Carol McCloud’s book, Have You Filled A Bucket Today? A Guide to Daily Happiness For Kids.  A bucket filler is one who shares daily kindness through actions and words. The language taught in the classroom lessons is reinforced throughout the school year. In K-3, some students are recognized every other week for being outstanding bucket fillers and receive a bucket filling certificate. Our middle school students had the opportunity this year to pass on bucket filling positive messages with an interactive wall display to classmates, teachers or themselves.

Check out this great video that Mrs. Stoner made reviewing all the great life skills project our students participated in during the 2017-2018 school year:
ASA School Counseling 2017-2018 Video Review 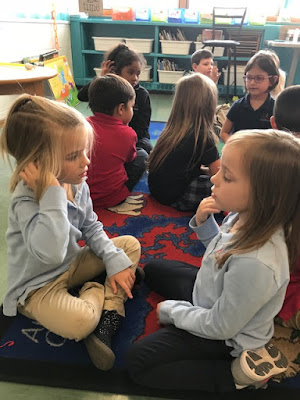