“The function of education is to teach one to think intensively and to think critically.
Intelligence plus character – that is the goal of true education.”
Dr. Martin Luther King Jr. January is a great time to remember that we are all unique and different, created in the image and likeness of God. The very things that make us different are also the things that make us wonderful. How boring would it be if we were all the same?!
In Preschool 5, we kick off our celebration of differences with Dr. Martin Luther King Jr. Day. This day is remembered in a variety of ways throughout All Saints Academy classrooms. Our focus is on celebrating all the things that make us special, sticking up for others when we know what is right, and doing what we can to help make the world even better. Our ASA rules - Be Fair, Be Safe, Be Kind - reflect just that.
Mixed Handprint Art
Each friend’s hand was only painted one color. The only way to create a colorful handprint is to connect with a friend who is different from you! This activity was filled with lots of ooh’s and aah’s. Slow motion high fives are highly recommended! 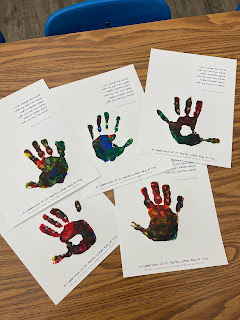 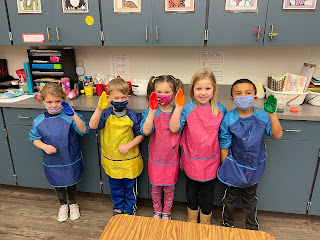 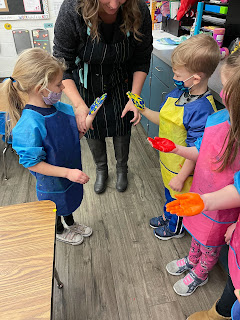 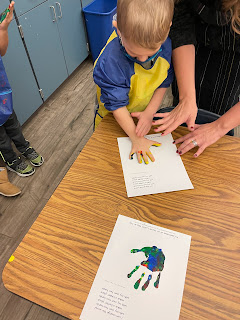 MLK Initial Comparisons
We learned the first, middle, and last names of our friends and compared! Each letter was decorated in a different way at a station, then cut out and glued in order. 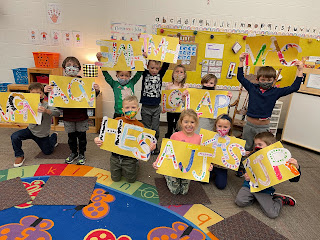 Lay and Listen
The kids participated in a lay and listen activity as they took in the meaning of the words in the song, My Own Two Hands. We listened to Jack Johnson’s version of the song, followed by Ben Harper’s Reggae original. 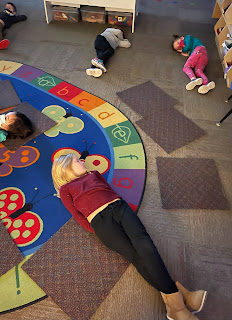 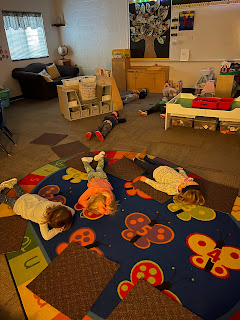 Books and Media
Our week was also filled with some wonderful books and media! Kid President was a group favorite! Check him out if you’re not familiar. We watched How to Change the World (a work in progress) and 20 Things You Should Say More Often. 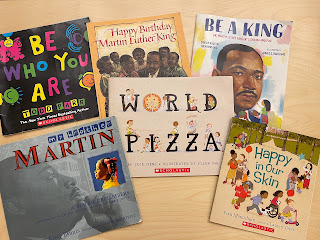 The legacy of Dr. Martin Luther King lives on as we share his words and stories with future generations. It’s powerful to be reminded of the differences we can make, no matter how small.
“The time is always right to do what is right.”
- Dr. Martin Luther King Jr.
Posted by All Saints Academy at 8:36:00 AM No comments: Third and Fourth graders received a gift from All Saints Academy in November! The excitement is real. With “Scripture Scavenger Hunts,” third graders learn how to locate Scripture using book and verse references. They read common Scripture verses to identify how Bible-rich our faith is. Beginning in grade 4, students learn to search Scripture, explore their faith, and personalize their Bibles with post-it notes highlighting special pictures and meaningful verses.

The beauty of the Catholic Youth Bible is that it is more simple to read. There are sidebars and insets throughout the Scripture to explain events and traditions of both Old Testament and New Testament stories. These Bibles remain in school and travel with the kids as they advance through their intermediate and middle school years. In the spring of the year they graduate, they take their Bible with them forever! 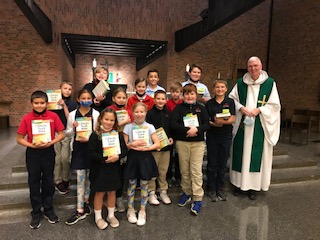 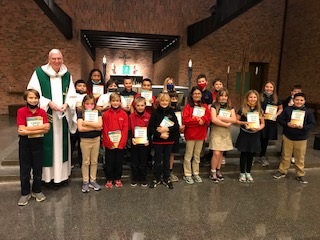 Father Tom blessed the Bibles during the Introductory Rite at Mass on November 18.

“I like it because it’s clean and new and really cool!” said Harry.

“I’m excited to learn more about Jesus with my new Bible,” Lauren said with a huge smile.

“The new Bible is more simple to read than the old one!” said Darren.

“All night, all day. Angels watching over me, my Lord!
All night. All day. Angels watching over me!”
Following our first visit to the music room this past September, our preschoolers returned to the classroom and sang the above song on loop for the remainder of their morning. The sweetness and purity of their earnest little voices helped we teachers realize the deep value in the addition of our new preschool offering, Liturgical Music.
Twice weekly Mrs. Vonnie Clark and Mrs. Carol Fedewa share their talent with some of our youngest learners, our preschool 3, 4, & 5 classes. Vonnie has been with All Saints Academy since its inception, and Carol joins us for the first time this year. The students look forward to the movement and song, and the teachers enjoy the opportunity to sing along with the kids. Connections between what the kids learn in the classroom and the atrium are being made –The Word alive through music! We are so very thankful to have Vonnie and Carol on our team and for their efforts in growing these little souls in such an entertaining way! This year All Saints Academy has teamed up with the CAP (Civil Air Patrol) Program to use an aerospace theme to promote STEM subjects in Science class.
The 8th graders spent the first trimester of this school year learning about physics, specifically focusing on force and motion. We learned about different types of collisions and what happens when two objects collide. We learned all objects have an elastic limit. We also learned that increasing the speed or mass of an object affects the peak forces in the collision, with speed having a greater overall effect.
We learned about Newton’s Three Laws of Motion. The first law is about inertia, an object at rest stays at rest or an object in motion stays in motion unless acted upon by an unbalanced force. The second law is called the Law of Force and Acceleration. It tells us that more force is needed to accelerate an object if the mass is higher. The third law is the Law of Action/Reaction. It tells us that for every action there is an equal and opposite reaction.
We received a Rocketry kit from Midwest Model Supply to complete our unit on forces right before Christmas break. Each 8th grader was able to build their own rocket using the provided kit and then we spent two class periods launching our rockets by the playground. 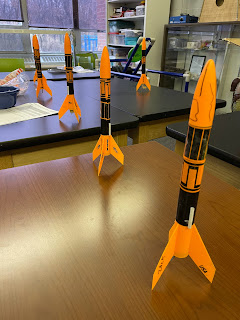 On the second launch day the 3rd through 7th graders were invited to watch. It was really exciting when a parachute actually opened to help the rocket gently come back down. We even caught a few rockets! Nicholas Schaab said “my rocket got stuck in a tree, never to be seen again.” 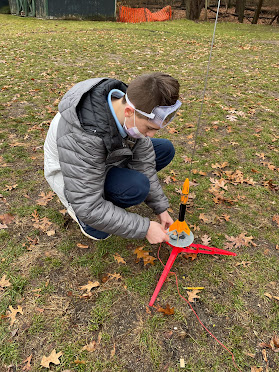 Zack Kieda said “the rockets were a great way for us to test the laws of motion that we learned about in class.” 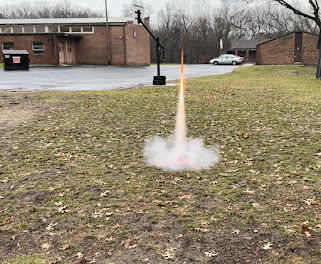 A huge thank you to the Aerospace Education Team, especially Sue Mercer, for her help obtaining these kits! And to Mike Sieloff, a 4th grade grandparent, for purchasing the membership to allow us to complete more fun, hands on activities in class.
Posted by All Saints Academy at 3:21:00 PM No comments: