The Hope Garden, located on the Northern side of the Upper Campus, was recently redone by Aiden McGavin, an ASA alumnus, for his Eagle Scout Service Project. Aiden is a senior at Catholic Central and started in scouts as a Tiger Cub in ASA's pack 3328. 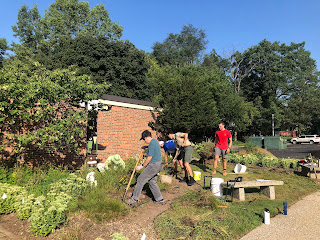 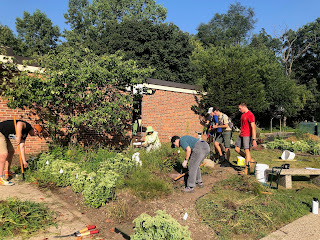 Aiden wrote the following about his project:

I had come up with the idea for my Eagle Scout Service Project to be all about native plants almost a year ago when I was working with the City of Grand Rapids to design and install a larger garden in one of their parks. But as time went on, I realized that the legalities and logistics of installing a garden in a City Park would be a bit too much to handle. However, ASA came to mind almost immediately as an organization that I could work with.

After talking with Ms. Giroux, Mr. Debri, and Fr. Tom, I came up with a design to renovate the Hope Garden. Having been totally taken with weeds and overgrown plants, the Hope Garden, located on the Northern side of the campus, could have used a little help. I was exhilarated to finally move forward with this project so that my volunteers and I could not only make a difference in the aesthetics of the school, but also maximize the environmental benefits of the area.

After putting together an extensive proposal for the renovation of the Hope Garden, I presented my project to a special board of review at the BSA Michigan Crossroads Council, who approved the project. I also wrote a grant request to the Saint Alphonsus Educational Endowment Board, who were the major financial donors to the project. Once I had my paperwork and finances all settled, I gathered my materials, tools, supplies, and volunteers, and got to work.
Essentially what we did with the Hope Garden was remove much of the existing plant material that was overgrown and replaced it with new and mostly native plants. We also added some nutrient-dense soil to provide the plants with a but of extra nutrition. Once the plants were in, we added wood chips and a special sign that identifies the garden as a ‘pollinator habitat’. And this is what makes this garden special. The plants that I chose to put in this garden were specially chosen to attract native pollinators such as bees, butterflies, and hummingbirds. All of these pollinators contribute immensely to our ecosystem and agricultural industry. Since native pollinators are on the decline, I felt that I had to do something to help them out. So by planting this small garden, bees and other pollinators within about a 3 mile radius of ASA’s Upper Campus now have a safe place where they can feed on nectar and pollen, while also contributing to their respective environment.
This project was made possible from the support of All Saints Academy and St. Jude Parish’s administration teams, the Saint Alphonsus Educational Endowment Board, Mackinaw Landscaping, Lily and Sean McGavin, and all of the volunteers that sacrificed a couple days of their summer to work with me in the heat and humidity of late August. Finally, Mr. Jon Fournier (former ASA staff member, Boy Scout leader, and mentor), who past away in 2017 was a big inspiration of mine in my Scouting journey. He was always there to help me make progress towards my Eagle, and though he is not physically here with us, his memory still motivates me and has pushed me along the toilsome trail to my Eagle. So I’d like to give him a big thanks as well.
Posted by All Saints Academy at 11:43:00 AM No comments: 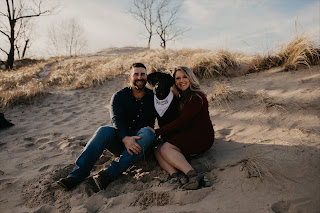 Hi, I'm Mary Anolick (Ms.A). I will be getting married in January!

I enjoy teaching Physical Education because I want to inspire people of all ages to find joy in staying healthy and active. I went to Grand Valley State University for my undergrad then continued my education at Davenport University where I earned my master's degree in Education.

In my free time I enjoy waterskiing, snowboarding, working out, and spending time with my dog. Fun Fact-I've been skydiving! 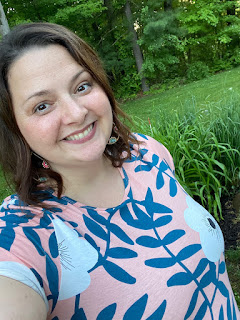 Hello! My name is Susan Zarzecki, the children call me “Señora Zarzecki,” and I am excited to be joining the All Saints Academy family, in conjunction with GRPS, as the Spanish teacher! I was born in Grand Rapids, the youngest sibling in the App family. Fun fact, my husband and his siblings attended Blessed Sacrament, K-8, so we laugh that I teach where he attended.
I may have a familiar face to you. My husband and I have three children who attend ASA. I also try to volunteer where I can. He and I fell in love with the early childhood program at ASA and have stayed and loved it! I am excited to pour my love into your children, and this community. Thank you for sharing your children with me, and ASA! I look forward to partnering together.
This will be my 19th year teaching. I began my career after graduating Loyola University Chicago with my BA in Spanish, with a focus on Golden Age literature. My first teaching post was a Marist school by the name of Notre Dame Preparatory & Marist Academy, a wonderful I.B. school in the Pontiac/Waterford Area. We moved back in 2008, after my husband and I completed our graduate studies at the Jesuit school University of Detroit Mercy, wanting to be closer to family. My second post was at Walker Charter Academy. I loved my last 13 years there and have made life-long friends and connections. There I taught and helped build two strong programs, Spanish, as well as theater, as I co-directed their musicals.
The opportunity to be where my children are, and help grow this delightful community, was too good of an offer to pass up! I feel blessed to have been hired by GRPS and able to work here with so many children who I already knew and loved, as well as those I can’t wait to get to know better. Looking forward to a great year!
Posted by All Saints Academy at 3:04:00 PM No comments: 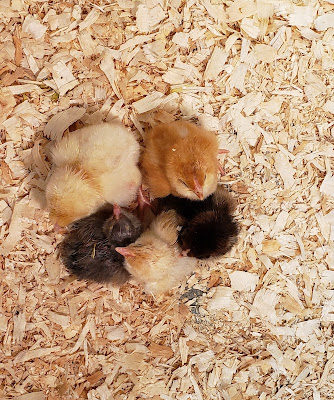 This past year the fourth graders were again able to hatch chickens as part of their learning experience. They were able to raise and put up a couple of chicks up for adoption.

As a literary connection to this project students practiced their write skills to assemble a blog to advocate for their adoption and also write a group creative story inspired by their temporary class pets.

You will love these chicks.  They are very fluffy, cute and lovable. They enjoy playing, laying and looking at you.  If you get a chick you will love him/her and he/she will love you.  Also you can name it anything you would like from A-Z. You can cuddle, hold, and snuggle them. Even if you don’t like chicks, they will peck their way into your heart.

The chicks are very friendly.  They are very nice to you when you hold them.  They sometimes go to sleep in your hand.  Some really like it if you pet their head.  Please give one of our chicks a happy home.

Hey you! Yeah you!  Do you want adorable little fluffy and cuddly chicks?  Of course you do!  They grow up to be big chickens so you will have to feed them often!  The best part is that you choose which one!  Just come to the upper campus, you will hear them peeping!
Tristan

The chicks are so nice.  You can hug them and they love to be held.  They play with each other all day.  They can be a little loud but it's funny.

We have free, cute baby chicks.  They are cuddly and cute.  They are also fluffy and active.  Here are 3 reasons to adopt them:  they are cute, they are sweet and cuddly, they need a home and are free. They could die without you.  Come help them.  They love humans.  Please adopt them. 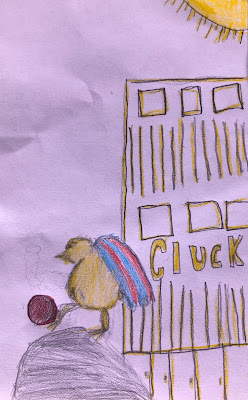 Inspired by "Cluck," a big muscular chick with the skills of an escape artist.

Chillin With My Homies - by Sam

The Beginning - by Evelyn

Is Cluck Missing? - by Lexy

Adventures of Super Chick - by Ed

The Adventures of Cluck - by Cooper

Cluck and the Amazing Force - by Mary

Isaac Saves the Day - by Ellie

Cluck the Super Chick in Surrendering Mayhem - by Tristan 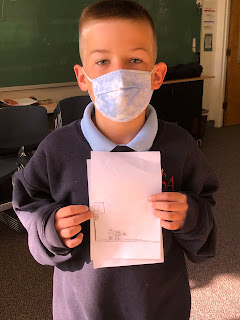 Each year students at the ASA Upper Campus participate in a class retreat. The 7th grade class retreat breaks open the great mystery of the Eucharist, the source and summit of our Catholic Faith.
As part of their class retreat last year's 7th grade class completed a visual scavenger hunt around the Upper Campus in search of images that could act as daily reminders of the Eucharistic Prayer II from Mass. Below are a few of the key phrases from this prayer and photo the class assembled as part of this reflective activity.

Lift up your hearts. 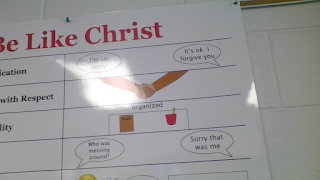 We do well always and everywhere to give you thanks, Father most holy. 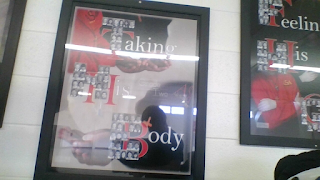 Take this, all of you, and eat of it, for this is my Body, which will be given up for you. 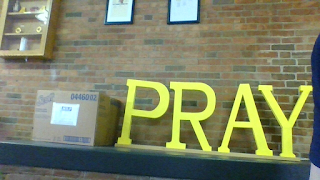 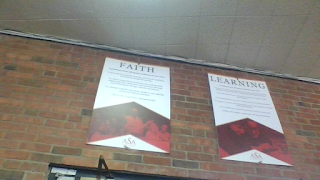 Remember, Lord, your Church, spread throughout the world. 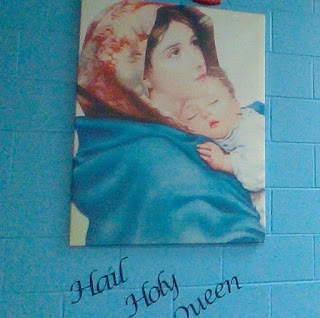 ...and all Saints who have pleased you throughout the ages, we may merit to be cohears to eternal life...