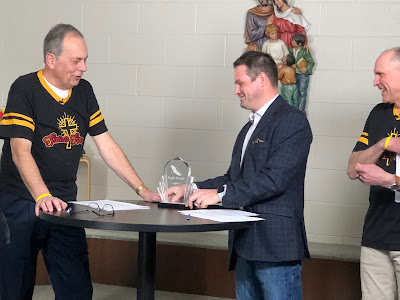 The Eagle Award is presented each year by the Home and School Association to a member of the ASA community in acknowledgement of his or her extraordinary contribution to the success of All Saints Academy.  We began a new tradition in 2018, presenting this prestigious award on our school’s feast of All Saints Day. Of course COVID had us reroute our plans with this as well, so this year we awarded the Eagle Award at our Web-A-Thon on March 13, 2021.

This award enhances the culture of All Saints Academy by drawing attention to those who are living our Catholic faith and supporting our school mission by holding them up as an example for others to follow.

Prior recipients of this award have included:

Along with a trophy for them to take home, the recipient’s name will be added to a perpetual plaque that is displayed in the halls of both the ASA campuses for all to see.

While it is true that no great achievement is accomplished by the work of one person, a significantly great work like the creation, building and operation of All Saints Academy requires talented and committed people. The winners of this award reflect the characteristics we hope for in our students and need in our school family.

There are a handful of people in the All Saints Academy community who can say they have made an impact on every single child at ASA. John Matlak is one of these people. If we had a time machine and could go back six years ago and walk our halls, classrooms, and other learning spaces they would be almost unrecognizable. Each classroom has been outfitted with the most updated educational furniture. Students and staff are safer because of the security upgrades throughout both campuses. Even the decor of the walls has changed substantially.

Beyond the material improvements, John became a public voice of ASA. Whether at Eaglefest or Eat Pray Run (and even coming out of retirement tonight!), when John spoke, people listened. But what the public may not have seen was the hours he spent prior to any of these events transporting tables, mapping out 5K courses, or tying balloons. John has a lot of sweat equity into ASA.

John was also someone who went beyond his duties as Development Director and helped in any way possible. Whether it was holding the door or answering the phone in the morning at the Elementary Campus or subbing for sick teachers and even teaching an elective at the Middle School Campus, John was always willing to help.

Finally, John is someone who truly believes in the value of a Catholic education. Of course we would know this from attending Eaglefest or any other time John emceed. But what I always valued most was our private conversations about the importance of Catholic education for our families. He cared so deeply about bringing this mission to everyone.  Congratulations Mr. Matlak.