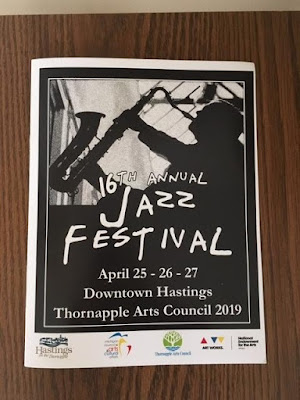 For many years All Saints Academy has offered jazz band as an extracurricular activity for 6th, 7th, and 8th grades. Jazz Band meets weekly, after school, under the direction of Mr. Matt Palmieri, ASA Band Instructor. Jazz Band is not just a fun activity. It exemplifies core beliefs as well as ASA Vision and Philosophy.
Thursday, April 25, 2019, the ASA Jazz Band took a day-long field trip to Hastings for the Annual Jazz Festival. This three-day event, sponsored by the Thornapple Arts Council, features professional groups as well as nearly 90 groups representing schools throughout Michigan. Middle school, high school, college, and professional jazz groups are scheduled hour by hour at nine different venues throughout downtown Hastings. I went with the group as a chaperone. During the bus ride, one mom commented, “This is a great learning experience for kids. It is very valuable to both perform and to be part of the audience. Also, Jazz Band gives kids an opportunity to play two different instruments – one for the school concert band and another for jazz.” As our ASA Philosophy notes, “We educate the whole child ….to become the best version of themselves through personal growth, creativity, ….We respect and celebrate each child’s God-given unique gifts and talents through innovative and individualized approaches to learning.”
Generally the day includes the bus ride, the ASA Jazz Band performance, a professional clinician’s critique, lunch, a chance to listen to bands from other schools, and a visit to the ice cream shop,  This year’s schedule called for the listening sessions and a stop at State Grounds Coffee House for ice cream in the morning. Unfortunately, the coffee house doesn’t serve ice cream before 11:00. This meant substituting smoothies, hot chocolate or other beverages and pastries in place of ice cream. To their credit, students accepted this Coffee House practice and found other treats to enjoy. 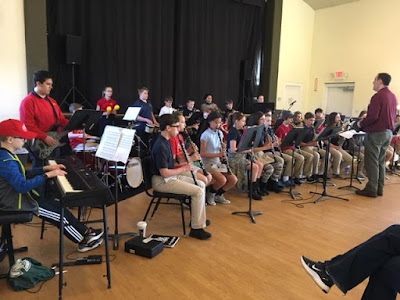 The 35-member ASA Jazz Band played at 11:00 A.M. before several parents, friends and local jazz lovers at Barry Community Enrichment Center. During the performance, to highlight various movements of a selection, a few students gave solo performances. Ben, one of the soloist proudly noted that “doing a solo opens up the opportunity to do something you’ve never done before.” This a great example of an ASA core belief, “We can do all things in Christ.” 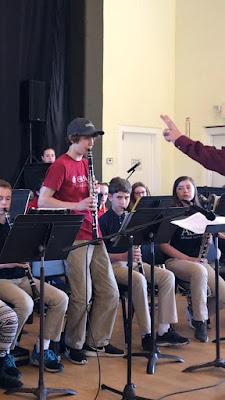 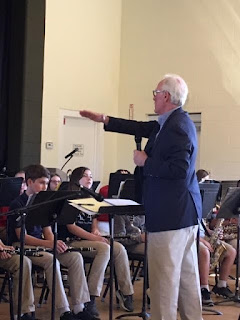 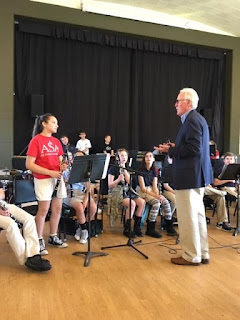 Steven L. Reed was one of the nine festival clinicians. He taught Jazz Ensemble at St. Joseph Public High School for 25 years and has won several awards for his work with jazz bands. Mr. Reed praised the band for its exceptional presentation and highlighted a few techniques that the musicians could work on. For example, he suggested moving the bass instruments closer to the drums to accent the beat. He encouraged the soloists to project their music to make it stand out even more.
He taught the clarinet players to lower their music stands and raise up their instruments for better sound. He shared a little secret of moving the music stand a bit to the side so they could hold up their clarinet and still read the notes. He also engaged Stephanie in conversation. She confessed that playing solo  an be a bit scary. Yet, he promised that if soloists played into a nearby microphone, it would strengthen their projection. Practicing would help them get over any fears they might have. Reflecting on this experience, Monica stated, “Jazz helps you improve your skills and ability.” Even before joining Jazz Band in sixth grade, Monica asked if she could play trombone. She said she chose this instrument because it’s different.”  Jazz – both playing and listening to others play – helps you express what you feel. It’s uplifting. It expands your spirit. This attitude reinforces ASA’s Vision of providing a “transformative education.” Jazz surely prepares students “to make a positive impact on others.” 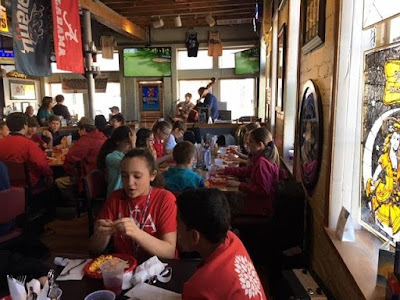 Buffet hot dog lunch at Kloosterman’s Restaurant while listening to jazz. When asked during lunch her thoughts about Jazz Band, Noel commented, “It’s a good experience to try out different things. Many people don’t know much about jazz. When I listen to other groups I can observe how they play my bass clarinet. I try to see how they do it and learn from them. I really liked the clinic and the different ideas he gave us.” 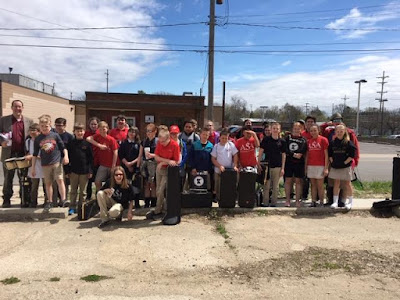 Ready to board the bus for the ride back to school. Ckaya’s comments summed up the day,
“It’s because of Mr. Palmieri that we have a good Jazz Band. The Jazz Festival helps us grow and shows how we can get even better. I’m glad we could do this.”